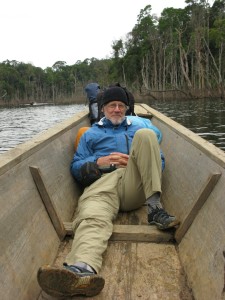 Almost fifty years ago, I arrived in the village world of northern New Mexico and received two unusual gifts. The first was a new education. My first—at a Baltimore prep school and an excellent state university (UNC-Chapel Hill)—was a good one, rich in literature, but the second went farther and deeper. It introduced me to a culture far from home and to ethics of community and place that were foreign to the world in which I’d grown up. It also tutored me in the requirements of living with the land. My teachers were my Hispanic neighbors in the village of El Valle and the beautiful, rugged mountain country that enveloped our valley. Through no fault of my own, I’d found the right place to grow up and grow out.

The second blessing was the gift of both time and reason to devote myself to the craft of writing. This was partly due to my finding a crashed airplane containing four unfortunate individuals, three weeks dead. It turned out that I received a cash reward for making the grisly discovery, and the money helped sustain me at a critical time. Even more important, however, was the manner of its coming. Quite by accident, I had discovered the airplane in the course of a solitary November backpack in the frozen Pecos Wilderness, a region of high, windswept peaks and forests that I was struggling to write about. The reward arrived like a grant from the mountains themselves, and it caused me to believe that if I quit my project, which at times I desperately wanted to do, I would be breaking the terms of the grant. No one would ask that the money be returned, but I feared the karmic consequences if I walked away. So I persevered. I kept making bad sentences hoping good ones would eventually come along. In time, they did, and the going got easier.

Slowly, books came along. Enchantment and Exploitation (UNM Press, 1985) evolved from my effort to write about the mountains. It was mostly composed at my farm in El Valle, but before it was finished, I took it on a detour to the University of Texas, Austin, where it became a PhD dissertation. It was finally published in 1985 and has never been out of print since. A revised and expanded 30th anniversary edition was issued in 2015.

In collaboration with the photographer Alex Harris, my co-conspirator in many adventures, I wrote a biographical tribute to our El Valle mentor and mutual friend Jacobo Romero, who died in 1985 at the age of 87. This was River of Traps, which appeared in 1990 (UNM, reissued 2007 by Trinity Univ. Press). The book was recognized as a finalist for the 1991 Pulitzer Prize in general non-fiction. The other two finalists that year made good company: John McPhee, my writing idol, and EO Wilson, who with cowriter Bert Holldobler won the prize.

Salt Dreams: Land and Water in Low-Down California (UNM, 1999), with photographs by Joan Myers, received a cluster of awards when it came out, including book of the year in creative non-fiction from the Western States Arts Federation. It later became the inspiration for a feature-length film, The Colorado (2015), directed by Murat Eyuboglu. Murat and I are co-credited as the film’s writers, and (a first for me) I am listed as lyricist. Live versions of this intrinsically musical work have been performed at the Metropolitan Museum of Art in New York, the Kennedy Center in Washington, DC, Stanford University, and other locations.

Seeing Things Whole: The Essential John Wesley Powell appeared in 2004 (Island Press) and Valles Caldera: A Vision for New Mexico’s National Preserve in 2006 (Museum of New Mexico). Both books grew out of my day job—I supported my growing family by working in land conservation. In the early 1980s I directed the North Carolina chapter of The Nature Conservancy (TNC). With support from the Lyndhurst Foundation of Chattanooga (which allowed me to write River of Traps), I moved back to New Mexico in 1986 and worked as a consultant for TNC, The Conservation Fund, and other clients. Trying to save western rivers, lands, and livelihoods led inevitably to deep respect for John Wesley Powell and his vision for an alternate West. Seeing Things Whole resulted.

IIn the late ’90s, I became involved in the nearly $100 million federal acquisition of Baca Location No. 1 in the Jemez Mountains of northern New Mexico. Congress renamed the 89,000-acre tract the Valles Caldera National Preserve and assigned its management to an experimental entity, the Valles Caldera Trust. President Bill Clinton, in his last days in office, appointed the trust’s first slate of trustees, in which I was included. I served as chair of the trust until my term expired in January 2005. With another adventuring friend, the writer and photographer Don Usner, I soon embarked on a book about the caldera, recounting the history of the acquisition and the early years of the trust. In 2020 we updated our book in a new, expanded edition that covers the transfer of the preserve to the National Park System and the massive ecological changes produced by the devastating Las Conchas fire of 2011.

It is fair to think of The Walk (Trinity Univ., 2007) as a sequel to River of Traps. Like the earlier book, it is set in El Valle and some of the same people and families appear in it. The Walk is more purely memoir than any of my other books, and it explores much of what I think I have learned about grief and hope. An excerpt from it, published in Orion Magazine, won a Pushcart Prize in 2008. None of my books is dearer to me.

In the middle and late 2000s I taught Documentary Studies at the College of Santa Fe, coaching students in non-fiction writing and in conducting field work far from home. In 2008, as the college reeled from the nation’s financial crisis (it would soon go bankrupt), I was awarded a Guggenheim fellowship, which allowed me to devote myself full-time to practicing what I had preached. A primary result was A Great Aridness: Climate Change and the Future of the American Southwest (Oxford, 2011), which the Western History Association recognized as the year’s best book on the Southwest. A Great Aridness led to approximately thirty speaking engagements at universities and other public venues. It continues to sell well.

Mere days after I sent off the finished manuscript of Aridness, I left the US for an assignment much farther afield: a three-week wildlife expedition in the forests of central Lao PDR, close by the border with Viet Nam. This engagement was in turn an outgrowth of work I had done on orangutan re-introduction in Borneo, which had attracted useful attention.

As Aridness had explored climate change (with a deep dive into the environmental history of the Southwest), the new project targeted another plague of the natural world, the wildlife trade and its toll on biodiversity. In the course of the expedition, conservation biologist William Robichaud and I traveled into a mountainous watershed never before seen by blue eyes. Out of that journey came my eighth book, The Last Unicorn: A Search for One of Earth’s Rarest Creatures (Little Brown, 2015), which was recognized by Men’s Journal as one of the best books of 2015 and by the Christian Science Monitor as one of the year’s ten best non-fiction books.

Even before Unicorn came out, I was drawn to another unusual project. My friend David Weber, the leading borderlands historian of our time and a luminary at Southern Methodist University, had died. His family asked me to complete a book that he had left half-finished. First Impressions: A Reader’s Journey to Iconic Places of the American Southwest appeared in 2017 (Yale). Each chapter is a more or less stand-alone examination of an exceptional place, and the book is richly illustrated with images integral to its historical stories.

Last but far from least is my tenth book, The Trail to Kanjiroba: Rediscovering Earth in an Age of Loss (Seven Stories Press). In 2016 and again in 2018 I joined medical expeditions into Upper Dolpo, a remote, ethnically Tibetan region of northwestern Nepal. Having written about climate change and species extinction, I went on those journeys seeking reinvigoration and a kind of consolation. I needed to find a constructive way of living with the discouraging implications of what I had learned. Without giving in to numbness or futility, I needed both to acknowledge the dismal state of things and still remain committed to changing them. I also felt a need to celebrate the beauty of Earth. The Trail to Kanjiroba describes my pilgrimage toward those goals. It is scheduled to appear in July 2021.

I don’t want to overlook several prizes that I especially appreciate, including some from my conservation work: a New Mexico Governor’s Award for Excellence in the Arts (2017); the Stewart Udall Award from the Santa Fe Conservation Trust (I helped to found the Trust and Stewart was a dear friend) (2009); a National Range Management Award from the US Forest Service (2000); and special recognition from Zuni Pueblo (1990) and Santa Clara Pueblo (2000) for service to those communities. Currently I serve as chair of Searchlight New Mexico, a non-profit investigative journalism organization.

New writing projects, meanwhile, simmer on back burners while The Trail to Kanjiroba gets ready for its launch, which is scheduled for July 2021. Stay tuned.