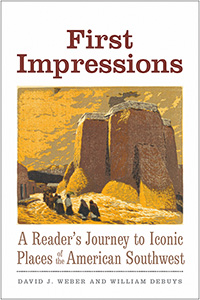 First Impressions was originally conceived by David J. Weber, who began work on the project in early 2005. He worked on the book off and on, in between writing other books, teaching at Southern Methodist University in Dallas, and directing the institute he had founded there, the Clements Center for Southwest Studies. First Impressions grew page by page, as time permitted.

Unfortunately, there was not enough time; David died in 2010. The Weber family approached Bill deBuys about picking up where David had left off, and Bill agreed. Bill had been a fellow at the Clements Center in 1999-2000, when he and David formed a friendship that grew as the years passed, with long talks over many dinners and visits to each other’s homes in New Mexico.

Another Clements Center fellowship enabled Bill to complete First Impressions. “The result is a book by two authors, who worked on the project not together but sequentially and who were friends of long standing,” Bill writes in the preface. “For both of us, the Southwest has been a source of lifelong fascination, and through the vehicle of this book we hope to share it.”